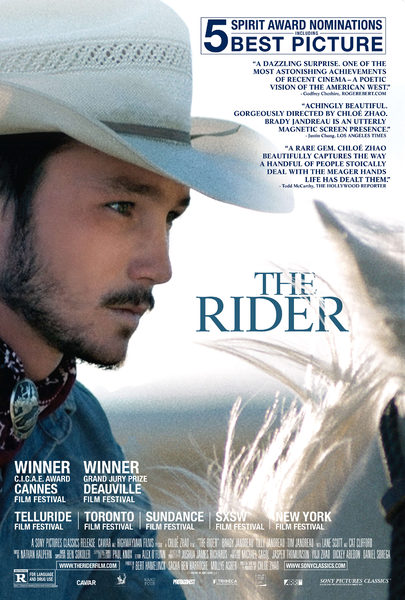 Based on his a true story, THE RIDER stars breakout Brady Jandreau as a once rising star of the rodeo circuit warned that his competition days are over after a tragic riding accident. Back home, Brady finds himself wondering what he has to live for when he can no longer do what gives him a sense of purpose: to ride and compete. In an attempt to regain control of his fate, Brady undertakes a search for new identity and tries to redefine his idea of what it means to be a man in the heartland of America.

The director discusses American dreams, working with a small crew, and her attempts to fuse truth and poetry in her prize-winning film.

Midway through The Rider, Lakota cowboy Brady Blackburn (Brady Jandreau) takes a job at a local grocery store. Forbidden by his doctors from ever riding again and with few prospects near his home on the Pine Ridge Indian Reservation, he’s humiliated to find himself wearing a name tag and waving a barcode scanner. Brady, the actor, later told Chloé Zhao that filming those scenes was one of the hardest things he’d ever done. Like the character he plays, Jandreau had recently survived a near-fatal skull fracture during a rodeo, and the painful prospect of giving up his cowboy life was still fresh.
The Rider is the second feature film Zhao has made at Pine Ridge, following Songs My Brothers Taught Me in 2015. “I wanted to make a movie about the cowboys click to continue reading artilce.

Click to view the Roger Ebert review of ‘The Rider’.

Note: We are still awaiting details on the expected April 2018 release of this film for viewing. Click to view release date info.